Boston's Freedom Trail in a Day

11
min read
A one-day urban adventure to one of America's most popular cities, Boston! The Boston Minuteman Campground is just 30 miles away and serves as a great jumping off point for a budget escape to the city and Boston's Freedom Trail.
GPS:
42°33'1.26"N, 71°32'14.5"W
Category:
Northeast

During our extensive New England road trip, we were fortunate that our day in Boston fell on a weekend in mid-September  - little commuter traffic and kids were back in school.

Although as tent campers we tend to gravitate toward camping away from cities, that doesn't stop us from exploring urban areas (Savannah, Georgia, and St. Augustine, Florida, come to mind). Boston has been on our wish list for a while and the Boston Minuteman Campground fit the bill. We couldn't have been happier - friendly check-in, clean, well-lit bathrooms (with plenty of hot water), spotless laundry facilities, a swimming pool, playground, and free wifi. Although more expensive than most state parks, Boston Minuteman Campground was worthwhile for its convenience to Boston and our Freedom Trail destination.

Dealing only with weekend traffic plus an early start, we arrived at the underground Boston Common Garage and at the start of the Freedom Trail by 8am.

From the garage we exited into America's oldest public park, Boston Common. Originally a grazing area for livestock in 1634, Boston Common has been the site for duels and hangings in the past to modern public rallies and concerts. The park now includes ballfields, a carousel, a tot playground, and the Frog Pond (a spray pool in summer; ice skating rink in winter).

We headed across Charles Street to the Boston Public Garden, established in 1837 as the first public botanical garden, to find the duck statues inspired by one of our favorite childhood books, Make Way for Ducklings. The winding paths took us through a green Victorian-styled oasis filled with colorful plantings, monuments, fountains, and benches. After viewing the darling ducklings, we saw the resident pair of real swans, Romeo & Juliet, hanging out in the 4-acre lagoon. For a special memory, consider purchasing tickets for a relaxing ride around the lagoon on the charming Swan Boats.

Next, we stopped at the Visitor Information building in the Boston Common for a restroom break and to purchase a $3 Freedom Trail Map & Guide. The Freedom Trail officially starts here and consists of 16 historical landmarks on a 2.5 mile path through the heart of Boston. Just follow the red brick road.

We spotted the brilliant gold dome of the Massachusetts State House, the second stop on Boston's Freedom Trail. Charles Bulfinch, one of the finest architects of the time, designed the State House and it was completed in 1798. Originally, the dome was wooden (and a leaky one at that) so in 1802 Paul Revere and Sons covered it in copper. Then, in 1874, at a cost of almost $3000, the dome was gilded in 23-karat gold leaf; it was regilded in 1997 - for $300,000.

Although not on the official Freedom Trail, we stopped at the Robert Gould Shaw and the 54th Regiment Memorial directly across from the Massachusetts State House. The Shaw Memorial honors Civil War commander Shaw and the first all-black militia in their fight to preserve the United States and abolish slavery. We first learned about the Shaw Memorial on our visit to Saint-Gaudens National Historic Site in New Hampshire. The Boston sculpture masterpiece took 14 years to complete.

With limited time in Boston, we skipped to the Granary Burying Ground, the final resting place for many famous Bostonians as John Hancock, Samuel Adams, and Paul Revere.

Built in 1729, the Old South Meeting House was used for both Puritan church services and public meetings. One of the meetings was the heated debate on the new tax on tea. The failure to reach a compromise led to the Boston Tea Party where 340 chests of tea were illegally dumped into the Boston Harbor. This defiant action was one of the sparks that set off the American Revolution. Make sure to grab a scavenger hunt for the kids at this Freedom Trail spot!

Another important stop on the Freedom Trail is the Old State House which was built in 1713. In 1770, the Boston Massacre, the first bloodshed of the American Revolution, took place under the East Balcony outside the State House.  A circle of paving stones marks the site of this deadly confrontation between the British and the Colonials.

Tummies were rumbling and I needed a coffee break, so the five of us got off the Freedom Trail and made our way through Boston's Quincy Market only to find it extremely crowded with other hungry folks. A variety of options greeted us from hotdogs, pizza, lobster, and chowder. We chose delicious muffins from Carol Ann Bake Shop for our mid-morning snack. Although Quincy Market has a large indoor seating area, we went outside to watch the street performers.

Refueled and rested, we made our way to Faneuil Hall, often referred to as the "Cradle of Liberty." Here we picked up a Junior Ranger booklet at the Boston National Historical Park Visitor Center as well as a daily listing of area ranger tours and programs. We then attended a free ranger talk program upstairs in the Great Hall to learn more about Faneuil Hall's important role as a meeting house from the 1700's to present times.

We wandered from the Freedom Trail over to Haymarket, Boston's open air market. Since it was Saturday, we joined the crowds at the vendor stalls, overwhelmed by the amazing variety and quantity of fresh produce. Our most impressive find was the exotic durian - a spiky fruit with a stench so bad that it has been banned from public transportation in Singapore.

The real reason we had left the Freedom Trail track - lunch. On a budget, the five of us headed straight to Haymarket Pizza, a no-frills, counter-service pizzeria tucked away in Boston's Haymarket. For only $13, we devoured a generously large pepperoni and sausage pizza - great sauce, thin crust!

Stop number 12 on the Freedom Trail (and yes, we skipped a few), we explored the home of the famous American patriot, Paul Revere. On the famous night of April 18, 1775, Revere and his companions set out to warn the Boston-area residents of the approaching British soldiers. Learn the truth here at the Paul Revere House about who actually accomplished the mission in the end - it wasn't Paul Revere!

Needing a fix for our sweet tooth, cannolis being the goal, we headed to Bova's Bakery in the middle of Boston's historic North End. Open 24/7, this family-owned pastry shop has been in operation since 1932. Bova's Bakery also serves pizza, subs, calzones, and specialty rice balls. What made the delicious cannolis even better for my girls - two English mastiffs (Thor & Odin) joined the party outside - 220 pounds each of furry affection!

Following the Freedom Trail through the Paul Revere Mall, we happened upon Vera Meyer, a glass armonica player. Meyer explained to us that Benjamin Franklin invented this instrument in 1761. Akin to making music with wet fingers on glasses, the glass armonica improves upon that and can actually produce chords and melodies. Our family was captivated by Meyer as she played tune after tune for the group surrounding her. Boston continues to amaze!

A popular spot on the Freedom Trail, the Old North Church acquired fame when two lanterns were hung from the steeple one night, signaling to the Patriots that the British would arrive by sea not by land. The Old North Church is an active Episcopal Church here in Boston and closed for tours on Sunday mornings during their services. We didn't have time for an inside tour, but the "Behind the Scenes" tour of the bell tower and crypt sounded fascinating.

As we passed Copp's Hill Burying Ground on the Freedom Trail, we couldn't help but notice the skinniest house we had ever seen. Turns out, the Skinny House is the narrowest house in Boston and originally built as a spite house, a home built to irritate the neighbors.

Still following the Freedom Trail, we enjoyed the view from the Charlestown Bridge with the Bunker Hill Monument in the distance. This Boston bridge has a dedicated pedestrian lane so no need to worry about the traffic.

Nearing the end of the Freedom Trail, the 221-foot Bunker Hill Monument obelisk pays tribute to the valiant colonists who fought in the first major battle of the American Revolutionary War, the Battle of Bunker Hill. Ranger programs are available throughout the day explaining the reasons that the colonists fought and usually ending with a musket firing demonstration. Afterwards, head up the Bunker Hill Monument and climb the 294 steps to the top to enjoy the splendid views of Boston and remember our courageous forefathers.

Head across the street to the Bunker Hill Museum to learn more the Battle of Bunker Hill, the construction of the monument, and a history of Charlestown. Exhibits include a cyclorama mural of the battle, artifacts such as a drum from the battle, and dioramas. For the weary visitor, the Bunker Hill Museum has public bathrooms, benches, and water fountains. Finish up the Junior Ranger booklet and collect your badge here.

Here at the end of the Boston Freedom Trail, a special favorite, USS Constitution, is docked at the Charleston Navy Yard. During the War of 1812, this wooden frigate earned her name "Old Ironsides" when the British Navy cannon balls were seen ricocheting off her hull. Later, thanks to the poem "Old Ironsides" by Oliver Wendell Holmes, plans to dismantle the beloved USS Constitution were halted and she remains the oldest commissioned warship afloat. 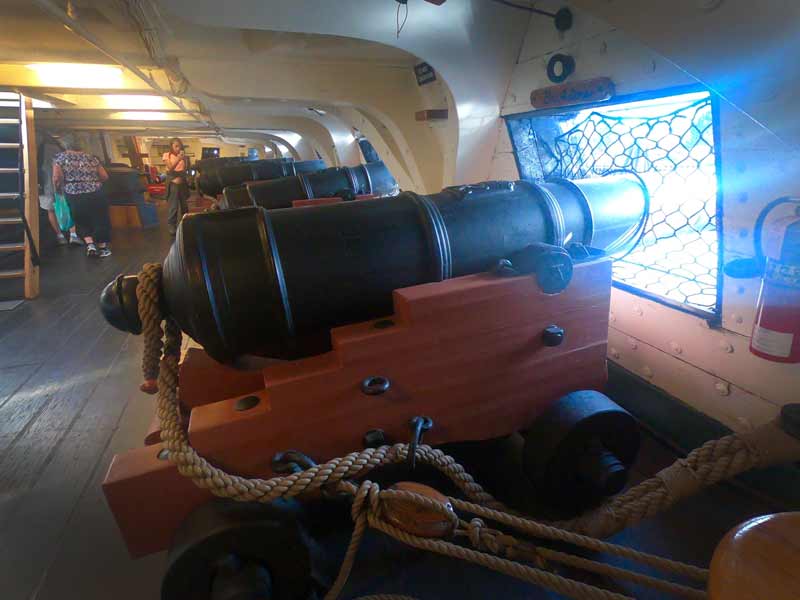 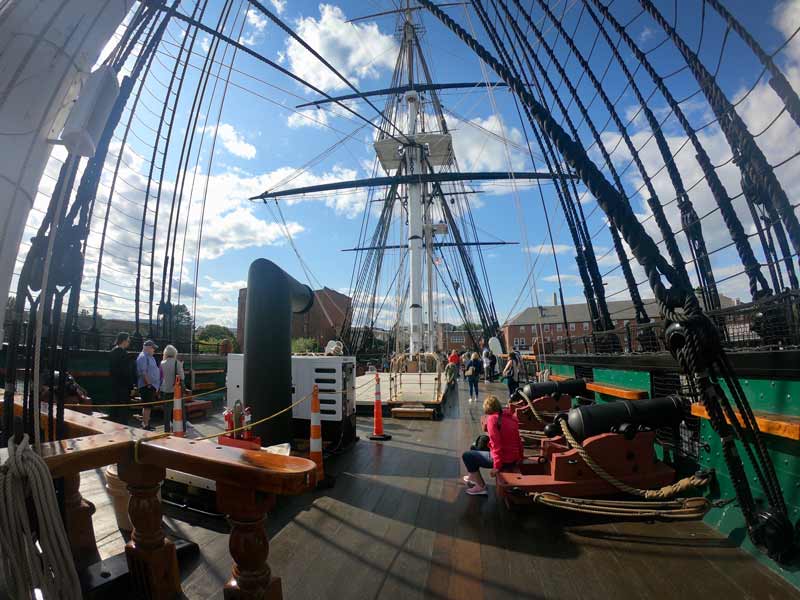 15 Best Places to See in Vermont