Savannah on a Budget with Kids

10
min read
History, architecture, art, and a heaping dose of Southern charm make a day in Savannah an urban adventure everyone in your party will love. Time your day well and you can be on the riverfront in time for a second (or third) cup of coffee, then work up an appetite exploring this very walkable and affordable city.

Less than thirty minutes from our camp at Skidaway Island State Park, you'd be hard pressed to find an excuse not to visit "The Hostess City of the South" Savannah, Georgia. In mid-March, we found plenty of on-street parking meters close to the riverfront. Depending on the zone, it is either $1 per hour or $2 per hour with unlimited time. Check out the city website for additional parking at city parking garages and access to the free downtown shuttle.

Established in 1733, Savannah is Georgia's oldest city. Be prepared for narrow, steep sets of stairs and cobblestone walkways. Comfortable walking shoes are a must! A slow tour – on foot, horse drawn buggy, or bicycle – is your best bet to get a real sense of how lovely Savannah really is with its gorgeous flowering shrubs and arching live oaks draped in Spanish moss. Part of its irresistible charm is the design of the city. Frequent town squares encourage a slower pace and sense of community.

Our first stop was at the River Street Visitor Information Center to pick up a map to the city. Public restrooms are available here, too. Before heading into the city center, we enjoyed walking the riverfront and exploring the various shops along the way.

A guided tour of the Owens-Thomas House and Slave Quarters gives a biopic view into the complicated relationships between the most and least powerful people in the South and into the stark contrast between their living quarters. A sobering realization that the wealth found in the fine furnishings and elegant home on one side of the courtyard was derived from human suffering and enslaved labor on the other.

The curators meet the past head-on and rightfully begin the tour in the two-story slave quarters, opposite the main house, where enslaved servants lived in meager conditions.  After years of modern surfaces like dropped ceilings and drywall had been torn away, what has been preserved helps tell part of the story of the nine to fifteen enslaved people – half of which were children – who lived there till the end of the Civil War.

Original haint blue 'paint' can be seen on the walls and ceilings - the  largest example known in America. Haint blue is an indigo, lime, and buttermilk mixture believed by some African cultures to have spiritual properties to ward off evil. The second level has been partially restored to period and gives you an idea of the sparse conditions the enslaved domestics had to endure.

Across the courtyard garden looms the Regency-styled home designed by architect William Jay for banker, shipping merchant, and slave trader Richard Richardson and his family in 1816. A technological wonder of its day, the tabby-walled home featured indoor plumbing – a technology that predated the White House by fifteen years. In 1830 George Owens, a wealthy planter, lawyer, and politician, purchased it for his wife and six children.

The upper house features finely furnished public spaces that were meant to impress presidents, bankers and powerful businessmen of the day. The working cellar of the main house includes the kitchen scullery, cellar, and cistern. Visitors can examine replica artifacts, interactive exhibits, and copies of documents such as census records, wills, and family letters that reveal much about the families and the slaves that served them.

Located in historic district of Savannah, the Savannah Seafood Shack offers fast, casual seafood lunch. They may have other things on the menu – we didn't bother checking. Sure, the low-country boil may be the best in Georgia – but we came for the fried shrimp. Best thing to do is throw yourself on the mercy of the waitstaff and just tell them how many people are in your party, how hungry everyone is, and then get twice as much as they tell you, especially if you've been walking around all morning (about 1/2 lb per person should do). Hushpuppies? Of course!

They don't take reservations, but we beat the crowds by arriving at 11:30am. The front of house staff is amazing and the place is super family-friendly.

If you time your morning Owens-Thomas tour and lunch correctly (see Savannah Seafood Shack above), you'll have time for a guided tour of the oldest public art museum in the South – the Telfair Academy. Opened in 1886 the Telfair Academy is the first art museum founded by a woman, Mary Telfair, who donated the family mansion to create a foundation for education in the arts. The building itself (a Neoclassical Regent mansion designed in 1819 by William Jay, the same architect that designed the Owens-Thomas House above) is an opulent light-filled and welcoming space full of a diverse collection of fine and decorative arts, period rooms, American Impressionism, and Ashcan school pieces.

Our docent for the morning was a charming hostess who thoroughly enthralled all of us – young and old alike. With our permission, the 45-minute tour soon turned into almost two hours of fascinating stories of not only the artists, but how some of the collection's pieces came into their possession, and how many of the artists were connected through familial and historical ties.

The Telfair's most famous sculpture, Bird Girl, was made popular by its inclusion on the cover of John Berendt's 1994 novel Midnight in the Garden of Good and Evil. The statue became such a tourist attraction that it was moved from the Bonaventure cemetery (see below) where it once stood to the Telfair Academy for its own protection.

Cathedral of St John the Baptist

Near the heart of the historic district, the Cathedral of St. John the Baptist was originally built in 1876. It is hard to miss, as the twin spires which adorn the facade are visible for blocks. Tragically, the boiler blew up in 1898 and the resulting fire destroyed most of the Cathedral. The Irish community's support provided the critical resources needed for reconstruction of this French Gothic cathedral which was finished again in time for the Christmas celebrations of 1900. Look for the Celtic cross and the Celtic knot in the baptismal font which pays tribute to their generosity.

Cathedral of St John the Baptist also features eighty-one Austrian made stained glass windows including the stunningly beautiful rose window behind the organ with St Cecilia, patron saint of musicians, at its center. The pews, original from 1898, are built from local Georgia live oaks. Although the pillars look like marble, they are actually steel columns.

The popular Forsyth Park, created in the 1840's, occupies thirty acres of land in Savannah's historic district and serves as the city's Central Park. While you may look on a map and think that its just a little out of reach, simply plan a few stops along the way at one of the many cafes, ice cream parlors, and bakeries which may help take the edge off.

Located at its north end is the iconic fountain from 1858 modeled after ones found in Cuzco, Peru, and Paris, France. With a tip to Savannah's Irish heritage, every St. Patrick's Day the waters run green. After a long day walking, Forsyth Park makes for the perfect spot for tourists and locals alike to gather and enjoy the expansive green lawns and gorgeous landscaping. To further emphasize Savannah's community spirit, the park also features a farmer's market, tennis and basketball courts, playground & spray pool, amphitheater, cafe, and the Fragrant Garden for the blind

Running along the scenic Wilmington River, Bonaventure Cemetery was established in 1846 on land from the former Bonaventure Plantation as a private cemetery originally known as Evergreen. In 1907, the city of Savannah purchased and expanded the now public cemetery from sixty acres to over a hundred. Towering live oaks with Spanish moss  line the pathways while the colorful azaleas and camellias add splashes of color among the hauntingly beautiful monuments and sculptures.

Interred Notables: Savannah benefactress Mary Telfair, musician/songwriter Johnny Mercer, poet laureate Conrad Aiken, and sculptor John Walz. We took a leisurely drive through the narrow lanes that criss-cross Bonaventure, and, like most of Savannah, the grounds are flat and very walkable.

With a family of six, camping at Skidaway Island State Park was a budget-friendly accommodation at only $42/night to access the city delights of Savannah. The campgrounds are only fifteen miles away from downtown historic Savannah and include hot showers, laundry, and flush toilets.

For more details, check out our blogpost on Skidaway Island State Park!

With just one day in Savannah, we need to go back - let us know in the comments your favorite spot for us to visit next time! 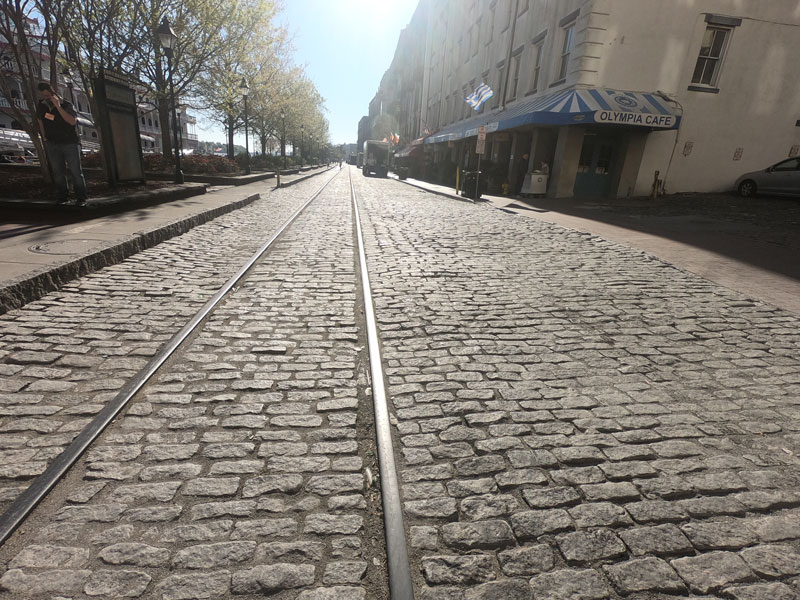 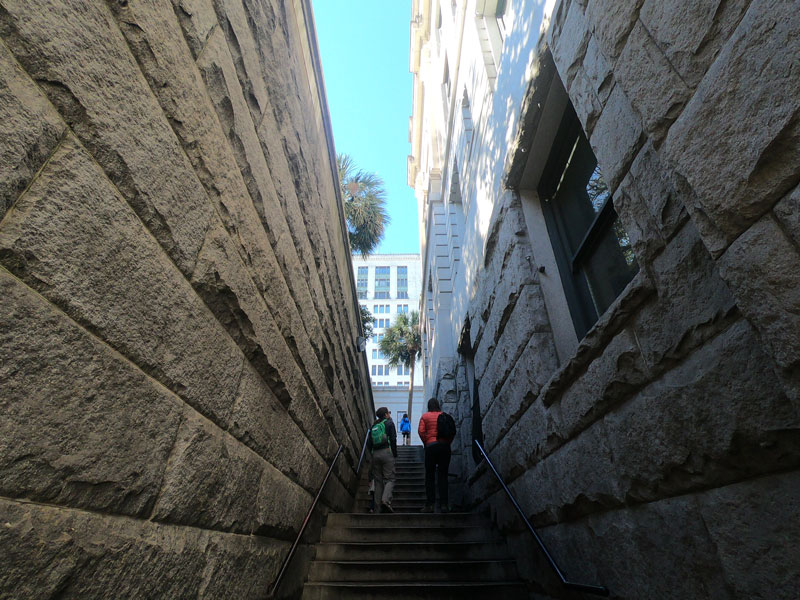